A Child’s Path to Graduation in Arkansas

The path to a successful future begins long before young people enter high school. Along their educational path, children hit several key milestones that provide a glimpse into their likely future. In this data story, we connect the dots between some key indicators that show how children progress within Arkansas’s educational system.

Our story begins in the womb, as mothers who take advantage of prenatal care, create healthy habits and have low stress increase their chances of putting their babies on a track toward health and success. In 2016, only 60% of Arkansas mothers reported that their first prenatal doctor’s visit was in the first trimester of pregnancy. That’s far below the 75% rate for the nation.

As a child grows, their years between birth and schooling are critical for development. Brain research now shows us that how parents talk to their children as early as infanthood affects brain development and therefore their readiness for reading and school. There’s little data available to tell us how children at these ages are faring.

However, there is some information on the share of 3- and 4-year-olds attending public pre-k programs, which can be important for helping kids prepare for kindergarten – especially those whose parents can’t afford quality preschool.

Following children as they enter kindergarten, we know they hit a major milestone. The state of Arkansas has identified a list of indicators showing what skills, knowledge and behaviors children need for a successful start to school. From these indicators, they’ve created a checklist parents can use to make sure they’re doing everything possible to support their educational development. Some states have a standardized assessment to show how many children are meeting a kindergarten readiness benchmark, but Arkansas does not track this with the same assessment across all districts.

The next critical point we find in a child’s educational journey is upon entering 3rd grade. While reading is a developmental skill that differs among children, the ability to read on grade-level by the 3rd grade is critical for following along in school from that point forward. In Arkansas, 37% of 3rd graders tested in 2016 were considered proficient or advanced in reading. That’s not all - there are troubling disparities, too. For example, 42% of white students and just 22% of African American students are meeting reading proficiency.

As a student enters 8th grade, they need to show a solid understanding of arithmetic concepts as they begin studying algebra because math proficiency at this level is a good predictor of high school graduation. In 2016, 44% of 8th graders were proficient or advanced on the state math exam, with similar racial disparities we saw in 3rd grade reading – 65% among white students and 40% for African American students.

Moving to our next milestone, high-school graduation, the racial disparities mostly disappear. For the class of 2016, the cohort (students of the same class) graduation rate was 87%, meaning all but 13% of 9th graders who began high school in 2012 graduated four years later. This includes 89% of white students, 85% of Hispanic students and 81% of African American students.

As we look beyond high school, however, to how graduates are faring in college, we see some hurdles. In 2016, 42% of entering college students needed a remedial course in math, reading or English. That’s an 11 percentage point improvement from 2010, but still a sign of concern. In addition, unfortunately, our racial disparities are back, with 73% of African American students, 47% of Hispanic students and 34% of white students requiring remediation.

Our journey down the path of child development in education raises several questions for considering Arkansas’s hurdles and bright spots:

The state’s tracking of college remediation is helpful in giving the public a picture of how well graduates are prepared, and it’s something not all states do. It shows Arkansas has a commitment to using data to measure the performance of the educational system.

Let’s find ways to take that commitment even further in making sure all kids have the opportunity to grow, learn and succeed.

[1] Data from the National Institute for Early Education Research. Since we only have data for the entire state, and not Arkansas counties, we could not make an indicator out of it. 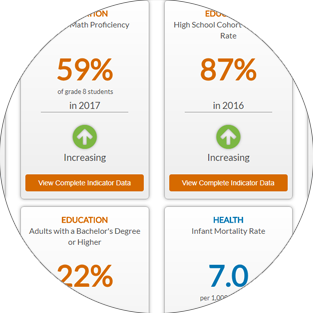